One of the Maltese UNESCO World Heritages is a collection of six megalithic temple sites:

Located at the end of the Xagħra plateau, the Ġgantija temple faces the southeast

and is enclosed by a boundary wall. The south-facing wall is the oldest one, and it is also more well-preserved than the others.

A fairly correct drawing of the temple´s layout was made by the French painter and engraver Jean-Pierre-Louis-Laurent Houël in the late 1700s.

In 1827, the site was cleared of debris, and soil and remains were discarded without proper examination and cataloguing.

This temple is found on the eastern side of the Mgarr village. The distance between Ta’ Ħaġrat and another temple named  Ta’ Skorba is approximately one kilometre. 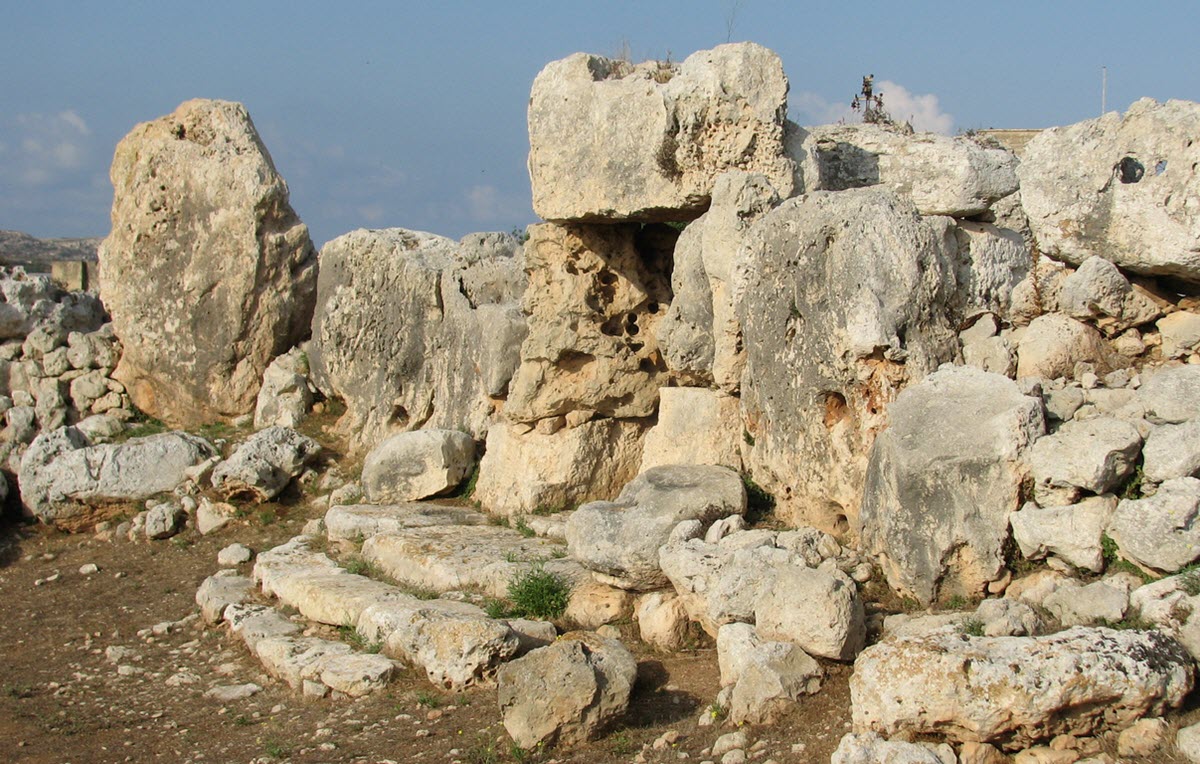 Ta’ Ħaġrat was once a double temple comprised of two adjacent trefoil complexes.

The Skorba temples were built on the northern edge of Zebbiegh and were first excavated in the 1960s, which is late compared to the other temple sites. Therefore, more modern and careful methods were employed. 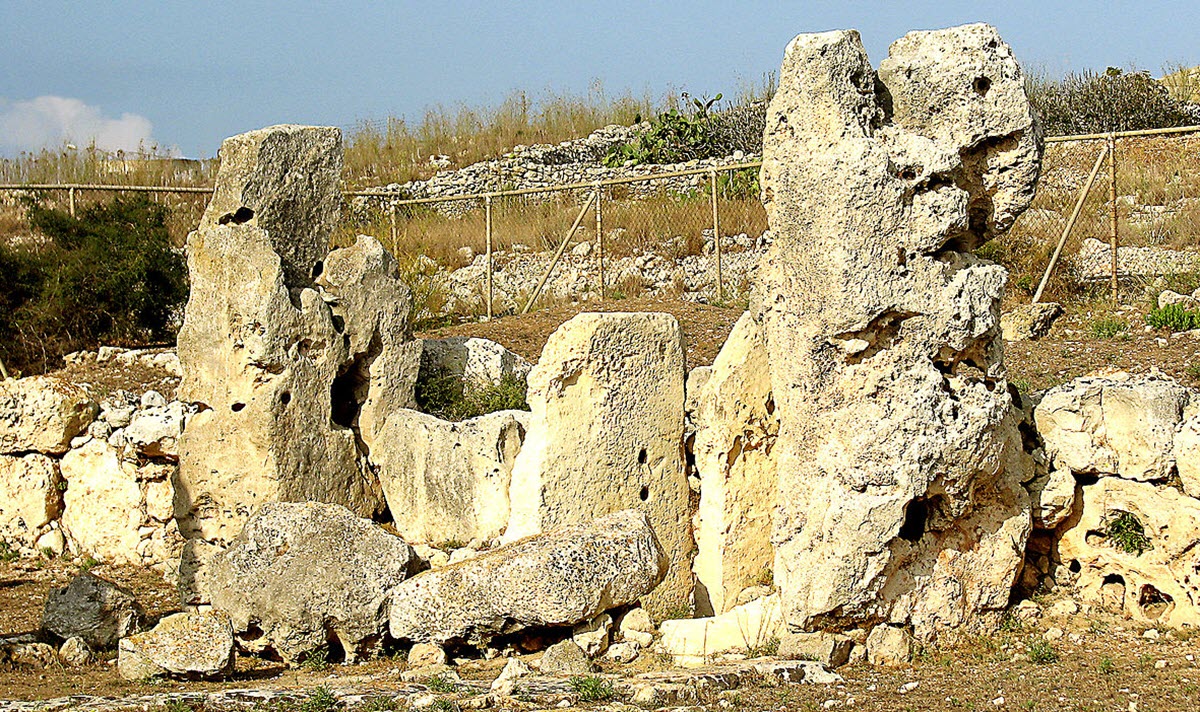 The structures are not in good condition. Of the once three-apsed shape, two apses have been destroyed down to ground level.

The oldest structure on the site is an 11 metre long straight wall west of the temple´s first entrance. Some of the oldest evidence of humans living on the island were found here.

Ħaġar Qim is located on a ridge, roughly 2 km from the villages Qrendi and Siggiewi. 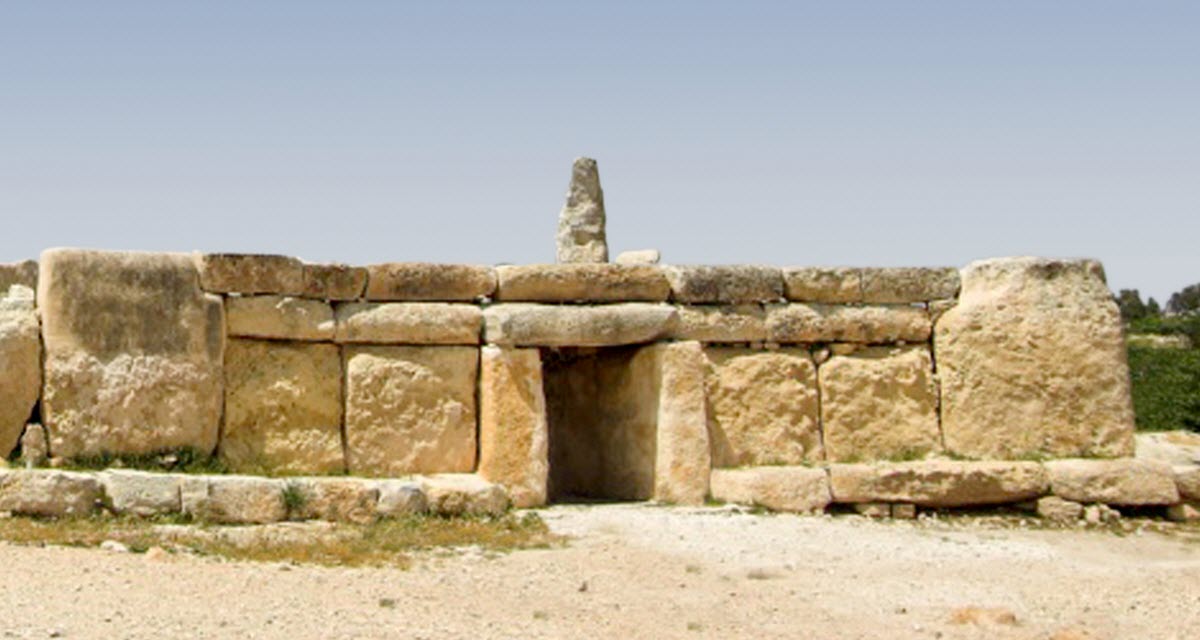 The structure was built using soft limestone, and the outer southern wall is more worn than the rest as it is exposed to the wind from the sea.

The temple has a wide forecourt with a retaining wall. Through a separate entrance, it is possible to access four enclosures that are independent of each other.

This site is found just half a kilometre from Ħaġar Qim.

The temple site is centred on an almost circular forecourt, and three nearby temples overlook this forecourt from one side. A terrace function as a separation from the steep slope that runs down to the sea.

This temple complex is located roughly 400 metres east of the Hypogeum of Ħal-Saflieni, and is surrounded by modern urban development. 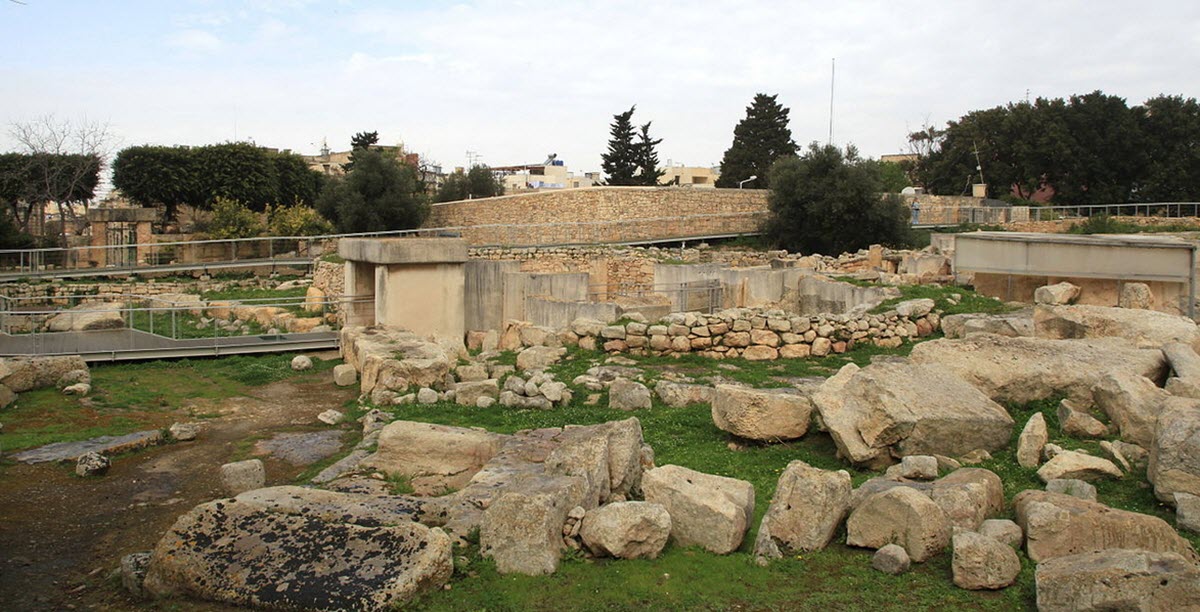 The oldest temple, to the north-east, was built in 3600-3200 BCE. It was created using very large stones, and some of them were roughly dressed.

The south and east temples are younger and were constructed in 3150-2500 BCE. Both are decorated. You can for instance see flat raised spirals and other carved patterns, and there is a relief depiction of two bulls and a sow in one of the temples.

The six sites listed as UNESO World Heritage are not the only sites with megalithic temples in Malta. Here are some examples:

The Megalithic Temples on Malta were built during three distinct cultural periods, between 3600 and 2500 BCE. According to Maltese folklore, they were built by giants. In older publications, they are called the oldest free-standing structures in the world, but those publications are from before the discovery of Göbekli Tepe in south-eastern Anatolia in the 1960s.